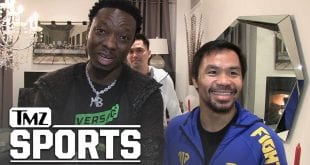 Fighting in front of the crowd is not enough for these two. They want to try each other out in the press room too. Manny hired his own version of the Barack Obama ‘angry’ translator. The guy destroys Adrien to hilarious results. https://www.youtube.com/watch?v=NXNcBw9zKX8